Have your say - Consultation on Moving Traffic Offences powers

A proposal for us to have the power to enforce MTOs (Moving Traffic Offences) will go out for public consultation this week. 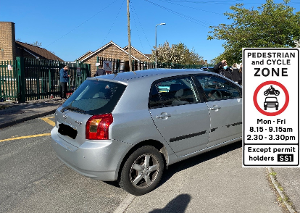 Following on from the Safer Streets pilot in Calcot, we are looking to expand on the work we already do to improve road safety, particularly around schools, and tackle congestion.

Feedback from the School Streets pilot scheme identified that although the majority of road users abide by the restrictions, there is a small number of people that do not. This creates a risk for those that continue to support and participate in active travel. Initially, these are the areas it would target.

ANPR (automatic number plate recognition) cameras would be installed at carefully chosen locations which meet criteria stipulated by the Department for Transport and PCNs (penalty charge notices) would then be issued.

Revenue generated would be kept by West Berkshire Council but must be spent on:

"It is really important that we improve road safety and congestion, particularly around schools, to keep children safe and ensure homeowners can access their properties without difficulties. MTO's will allow us to carry out enforcement where needed to help deter repeat offenders.

"I'd encourage residents to take part in the consultation and submit your views on the new powers, and whether you have any alternative ideas or suggestions on how to improve road safety and reduce congestion."

This public consultation will open from Tuesday 9 August until midnight on Tuesday 20 September 2022.

An anonymised summary of the consultation may be published.