Awards recognise junior citizen, volunteer and community group of the year as well as lifetime achievement. 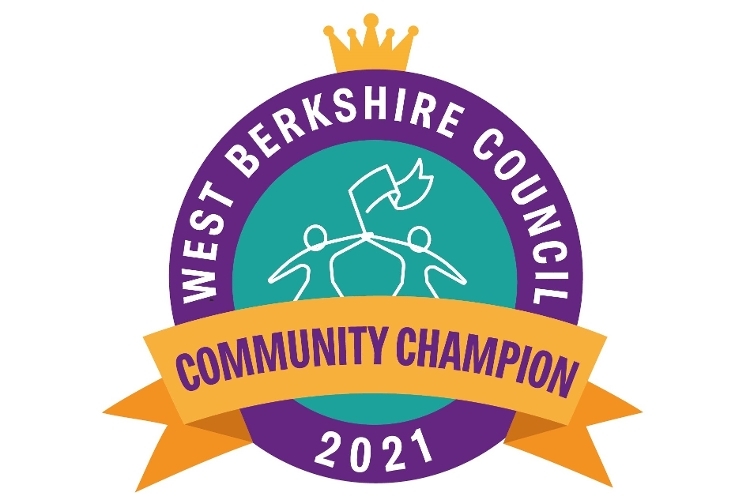 West Berkshire Council is delighted to announce the winners of the 2021 Community Champion Awards.

The awards recognise people who have done something special for their local community over the past year. There are awards for Junior Citizen, Volunteer and Community Group of the Year as well as a special Lifetime Achievement Award. The winners of the 2021 awards are:

Judges were impressed with the quality of nominations and as well as crowning joint winners in two categories there were also two Highly Commended nominees in the Volunteer of the Year category. More information about the winners and highly commended nominees can be found below.

"Congratulations to each of the winners and a heartfelt thank you for all you have done for others in your community. There is a tremendous amount of goodwill in our communities and we appreciate those who go out of their way to help others. The calibre of nominations was extremely high and I'm delighted that we have been able to recognise some exceptional community champions again this year."

Sign up to receive our Community Champion Awards newsletter and get the latest updates direct to your inbox - including future announcements about the 2022 awards.

Junior Citizen of the Year

Cara has helped set up the 'All Yours Period Box', helping to make over 3,000 boxes of period products and has helped to raise over £27,000 for the community, ensuring that those who do not have access to these or cannot afford the products will be able to use them.

Cara has written an assembly for her year at school all about period poverty and the All Yours project, and she has helped find other volunteers from amongst her peers to help out with the work.

The judging panel found this to be an impressive nomination with Cara, who is 15, showing real maturity on an important issue. Cara showed real commitment and was able to overcome shyness by selling raffle tickets in public.

Lillie has always shown a helping and caring attitude to the disadvantaged, disabled and vulnerable in the community. Since the pandemic started she monitored, offered help, put out rubbish and sorted recycling boxes for those who were extremely vulnerable in the community. She has particularly shown great kindness to a local lady with MS and she has been helping a local foster carer by sweeping her drive and keeping her garden tidy.  She has been doing so much more to help the community.

The judging panel were impressed by Lillie, who is 12, and has been volunteering since the age of nine. She has the ability to mobilise others to help and to look into the resources around her and tap into them. The nomination was from a local resident which means that her work really has been noticed by those around her.

Megan volunteers with 5th Kennet Vale Rainbows, supporting weekly activities for five and six year olds and she initiated and helps with running Thatcham Litter Pickers. She has also raised significant sums of money to support causes that affect her friends and family who live locally.

The judging panel found Megan to be a real role model to others, achieving excellence and in particular some impressive fundraising efforts. It was also noted that Megan had started volunteering when she was just 10-years-old.

Volunteer of the year

Dr Susan Millington is the founder and driving force behind the Lockdown Woods project. During the Covid lockdowns she encouraged local people to keep and nurture saplings in their garden, which would be planted to commemorate individuals who lost their lives from Covid, and as a lasting testament to the dedication of NHS staff and the wider community.

Susan worked with West Berkshire Council, Newbury Town Council and the Town and Manor of Hungerford to identify three separate areas where more than 1,500 young saplings were planted, including donated trees from the Woodland Trust.

The judging panel felt that this nomination really stood out, and demonstrated both positive environmental, and health and wellbeing benefits. Susan was able to mobilise others to be involved, showed commitment over a sustained period and reached all generations. It was a considerable project and Susan is a worthy winner.

Suzanne has lead the MySpeakerFriend project over the COVID lockdowns and beyond.  The project was developed to benefit the isolated and lonely residents in West Berkshire who had no digital access, and this enabled them to connect to their friends, family and even just have a chat with strangers.  This project delivers simple to use speakers along with USB sticks preloaded with personalised content.

Despite the challenges of the pandemic Sue has worked to be able to deliver the project in a COVID secure way ensuring that she kept herself, other volunteers and recipients safe, whilst ensuring social connection during a difficult period.

The judging panel were impressed with the strength of Suzanne's nomination and noted that it included feedback from residents who had used the service. Suzanne has provided a vital service - reaching out to people who would otherwise have been very lonely. It was a technically complicated process and the judges highly commended her for this project.

At the start of the pandemic Dave got involved with Thatcham Town Council to deliver Food Parcels and Prescriptions to people isolating, and got the nickname "Flexi Dave" due to his flexibility and reaction to short notice requests. Dave also supported the West Berkshire Foodbank as a delivery driver, and then, becoming aware of their Treasurer wanting to step down, he put himself forward for this volunteer role and has performed it since April (as well as continuing his delivery driver role).

The judging panel were impressed with this nomination, and that he has shown dedication in giving up so much of his time both on the front line and behind the scenes. He has adapted to the needs of the community through Covid-19 and he is highly commended for his efforts.

Community Group of the Year

The Young Carers Project support children and young people under the age of 18 that provide regular ongoing care and emotional support to another who is physically or mentally ill, disabled or who misuses substances. The young carer can become vulnerable when the level of care-giving becomes excessive or inappropriate for that child which in turn could risk impacting on his or her emotional or physical wellbeing or education and life chances.

The judging panel found the Young Carers Project to be a worthy winner. It provides an excellent service supporting young carers and the panel was impressed with the feedback from young people and the impact it has had on their lives. The panel recognised the importance of the service provided and were very impressed with the project.

The initiative was fuelled by the isolation felt by many women during the COVID lockdown. Research showed that women are much less likely to cycle than men, with a lack of road confidence, safety and technical know-how cited as main reasons. At the same time cycling, especially in groups, is shown to improve physical and mental well-being, as well as being good for the environment.

Historically, Newbury Road Club (NRC) only saw a handful of ladies cycling regularly with the Club. With the support of its newly elected committee, a small cohort of NRC lady members decided to change all that and developed the NRC Women's Ride Group.

The judging panel found that the group was a worthy winner - bringing people together, improving health and wellbeing and having a positive impact on those taking part. The panel also noted the testimonials and photos submitted in support of the nomination and the 'feel good' nature of the group.

The Mortimer Lunch Club provides somewhere for older residents to meet and socially interact to alleviate social isolation and loneliness. It has provided introductions for the two main village retirement residential complexes (Badgers Croft and Glenapp Grange) at opposite ends of our village whose residents previously had limited access to each other, to meet

The club has also provided old friends, who might have limited mobility or transport issues, the ability to connect once again. It gives residents something to look forward to for people whose calendars were despairingly empty of social engagements.

The judging panel noted the clear impact the club has had in supporting older people in the community. It has responded well to the pandemic and in support of the nomination the panel saw some lovely photos showing how much people value the service. The panel congratulates everyone involved.

Following the death of his prematurely born twin boys (Joshua and Samuel) in 1995, Trevor has worked tirelessly for his charity "New Life" to raise money for much needed specialist equipment in the three major hospitals (Reading, Swindon & Oxford) where the majority of West Berkshire mums-to-be will give birth and in turn increasing the chances of survival for many premature and seriously ill babies born to parents who live in West Berkshire.  Trevor is a truly local character who spent his early childhood being raised in Kintbury, he attended St Bartholomew's School and has spent his working life as a local dental technician.

The judging panel found Trevor to be a very worthy winner who has raised more than £1,000,000 and used a personal tragedy to make a difference for the benefit of a great many people. He has shown commitment and dedication over 25 years and is a true Community Champion.